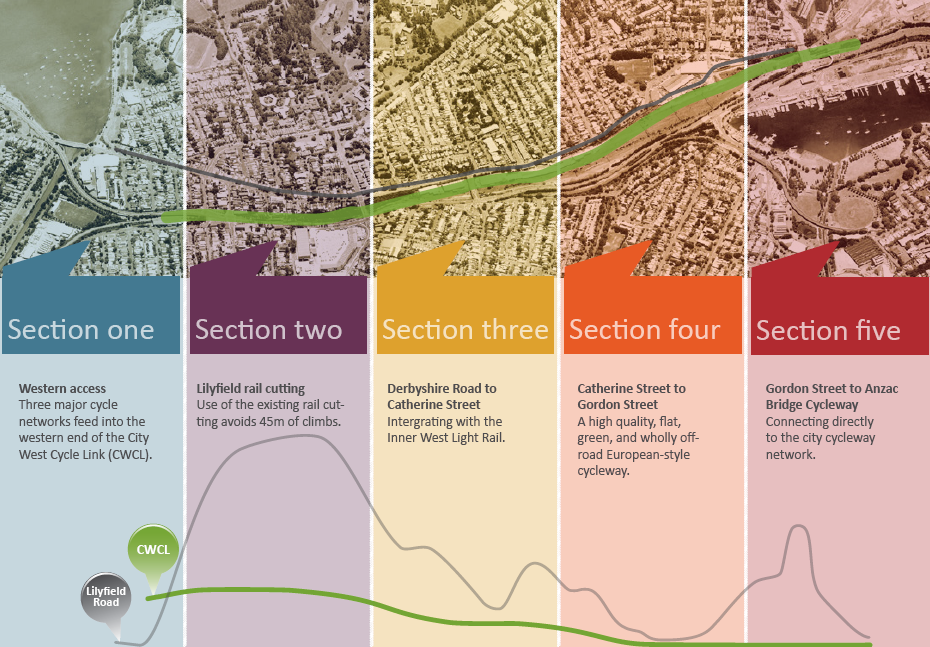 Extending from North Leichhardt to the Anzac Bridge, the City West Cycle Link would run entirely within the decommissioned Lilyfield rail corridor to provide a flat, quiet, green and wholly off-road cycling connection to the city’s separated (“green lanes”) cycleway network. The City West Cycle Link would address the missing link to the city for feeder cycling routes such as the (soon to be completed) GreenWay, Bay Run, and further afield, the Cooks River Cycle Path, and in doing so, fully unlock the value of those paths.

Section One – The Western Portal

people who ride towards the city from the inner west ultimately arrive to Lilyfield Road at Hawthorne Canal (pictured) at which point they are faced with a steep climb up to James Street (2). This climb is insurmountable for inexperienced or less competent cyclists. There isn’t an alternative route of similar convenience and directness to Lilyfield Road.

Cyclists using the soon-to-be-completed GreenWay* cycleway (3) will also be confronted with this hill.

* Currently under construction, The GreenWay shared path will provide a largely flat, off-road north-south cycling route between the Cooks River Path at Dulwich Hill and the Bay Run at Iron Cove.

Further, for cyclists intending to join Lilyfield Rd from the south via Darley Rd (4), the intersection with the City West Link road also presents the additional barriers of sharp gradient increases on Darley Rd and James St, insufficient road space for safe passage and restrictive signal green time to cross the six lanes plus slip lanes of the City West Link road. 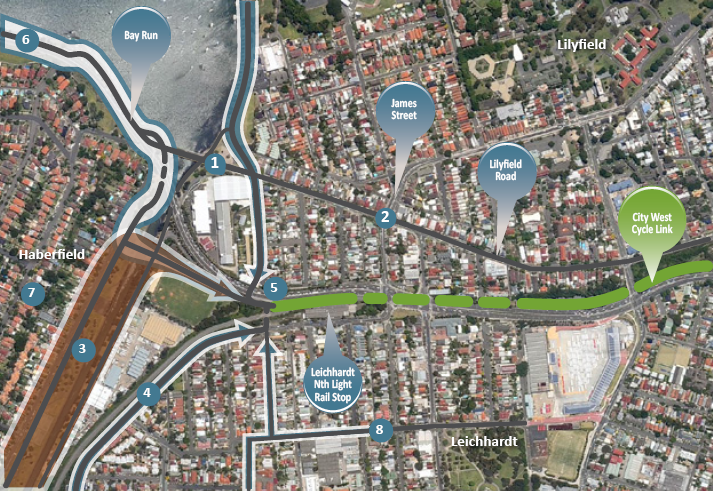 will remove all of these barriers by means of a cycleway via the Rozelle rail corridor. The City West Cycle Link would commence at Charles St and extend east on the northern side of the

Leichhardt North light rail stop. The Charles St (5) portal would serve as the entry point to the City West Cycle Link for cyclists approaching from:

• Inner West regions such as Five Dock, Abbotsford and Concord (6),

• areas serviced by the GreenWay (7),

without the need for them to negotiate steep gradients or heavily-trafficked roads.

The presumed barrier to the provision of a cycleway through the Rozelle rail corridor has always related to the misconception that there isn’t room sufficient for both a twin-tracked rail line and a cycleway within the Lilyfield section of the corridor.

The undercutting would be simply excavated and left as a rough-hewn rock face finish.

Excavation would be means of heavy machinery which would require the full width of the rail cutting.

The City West Cycle Link would sit within the tunnel and cutting without restricting the ability to provide the twin track rail formation proposed for the Inner West Light Rail service.

This section of the cycleway would:

• Utilise the northern side of the rail cutting and by undercutting into the rock face provide a 650m long cycleway 3.5m wide by 3.0m high; Section two

• Be separated from the rail formation by fencing to ensure the safety of cyclists and light rail passengers alike;

The benefits of this section of the cycleway include:

• Not interfering with the alignment or design of Inner West Light Rail;

Due to the potential for disruption to the Inner West Light Rail service, it would be impractical to undertake construction of the cycleway tunnel once the Light Rail’s power, cabling and signalling infrastructure have been installed. Consequently, the construction of the City West Cycle Link would need to be completed prior to the commissioning of the light rail service.

Once clear of the Balmain Road cutting, the cycleway will continue east under the Catherine St overpass to the northerrn side of the Lilyfield stop. A connection from the cycleway to the light rail stop would be provided. From there, cyclists would have an uninterrupted, essentially flat run all the way to the Anzac Bridge via the Rozelle rail corridor.

The depth of the Balmain Road cutting (shown) indicates the rise that cyclists presently endure when commuting via Lilyfield Rd. The northern side of the cutting, into which the cycleway will be undercut and fenced off, appears on the right hand side of the photograph.

The City West Cycle Link will continue east from the Catherine Street underpass and Lilyfield light rail stop as a flat cycleway all the way to the Anzac Bridge Shared User Path. Although not costed as part of this proposal, an at-grade link to Gordon St is indicated which would allow for access to and from Lilyfield. 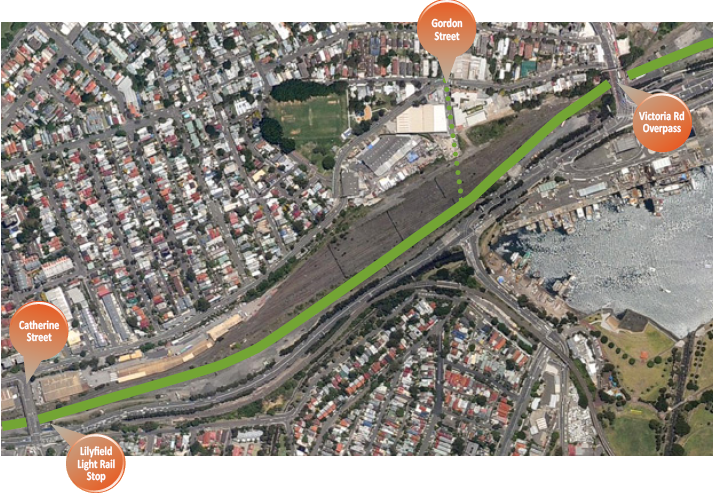 The alignment of the cycleway shown within the Rozelle rail lands is merely indicative. Its final alignment would depend on associated land use planning decisions such as the Bays Precinct planning process being undertaken by local councils and the Sydney Harbour Foreshore Authority.

Although this proposal is based on the concept of provision of only a cycleway (rather than a shared user path which may be used also by pedestrians), it should also be noted that there is sufficient space within the open sections of the rail corridor east of the Lilyfield rail stop to accommodate cyclists and pedestrians on separated paths, in a style similar to the Bay Run shared user path.

The final section of the City West Cycle Link will pass under Victoria Road via the existing and already sufficiently- wide underpass and connect to the existing Anzac Bridge Shared User Path. From there, cyclists could continue their journey over the Anzac Bridge to the city or alternatively, use the City West Link Road overpass to access Glebe or Bicentennial Park.

It should be noted that the cycleway alignments shown are indicative only and not intended as a recommended engineering treatment. The design of the City West Cycle Link’s junction with the Anzac Bridge shared user path would seek to:

• Uphold the safety of cyclists and pedestrians alike;

• Permit cyclists on the Anzac Bridge path to maintain their speed going uphill in either direction;

The cycleway would bypass the narrow Victoria Road Overpass currently shared by pedestrians and bicycle riders. 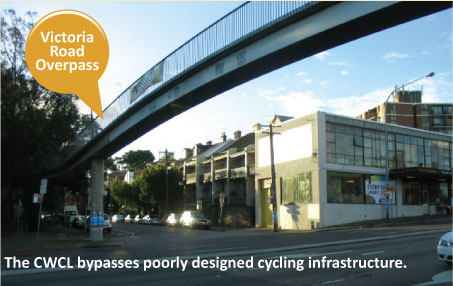 The path treatments to achieve these goals may include either a large triangular junction, small roundabout or very wide “slip” paths with adequate sight lines. This would be resolved at the detailed design stage in accordance with plans for adjacent land uses and the Government’s consideration of extending the City West Cycle Link north over the Glebe Island Bridge.